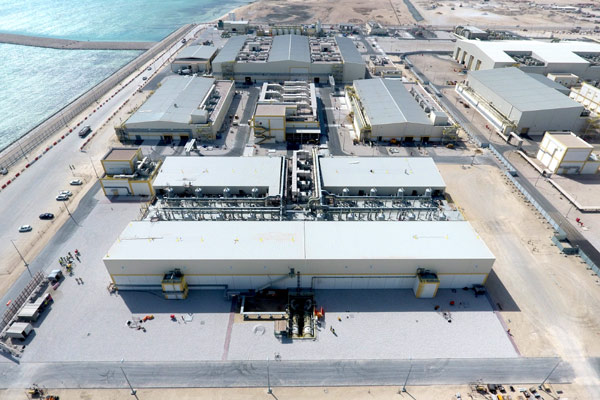 Leading Spanish infrastructure major Acciona has announced that a key desalination plant being operated by the group at Umm Al Houl in Doha, Qatar, has completed one million hours without any accidents involving lost time injury (Zero LTI) thanks to the great efforts of its workers and the safety measures applied in the plant.
The plant is part of a large-scale Integrated Water and Power Project (IWPP) that produces approximately 2,500 MW of electric power and can reach a daily total of 894,000 m3, including the production of MSF, said a statement from Acciona.
This achievement demonstrates the Spanish group's commitment to hazard prevention and the application of measures that ensure the safety and health of everyone involved, as well as the responsibility of the workers themselves by prioritizing and improving safety in the workplace.
Acciona has been the main partner in the project, designing, constructing and operating it from 2017 to the present day.
This reverse osmosis desalination plant has a total daily capacity of 894,000 m3 (in two phases) and represents a milestone in the world of desalination because it the first time that reverse osmosis technology has been applied on a large scale in the country, it stated.
This safety milestone is the result of teamwork by the workers and the operator, following several training courses in health and wellbeing.
A number of Safety and Hygiene (HSE) measures have been implemented and inspections have been made on a more detailed and frequent basis, which has led to an improvement in the state of the equipment and machinery, it added.
Among the preventive measures applied, Acciona said the key highlights were the regular operation and maintenance meetings related to work permits (PTW), improvements in the organization of the work such as the use of colour coding, certifications, the creation of specialized HSE (Health, Safety and Environment) committees, and -in particular- the efforts made in digitization.
All this means that situations of risk can be identified at an early stage and workplace accidents avoided, it stated.
The Spanish infrastructure giant said that this milestone had been reached by strict compliance with established international and local protocols to offset the Covid-19 pandemic, as well as the vaccination of 100% of the workforce.-TradeArabia News Service
Share