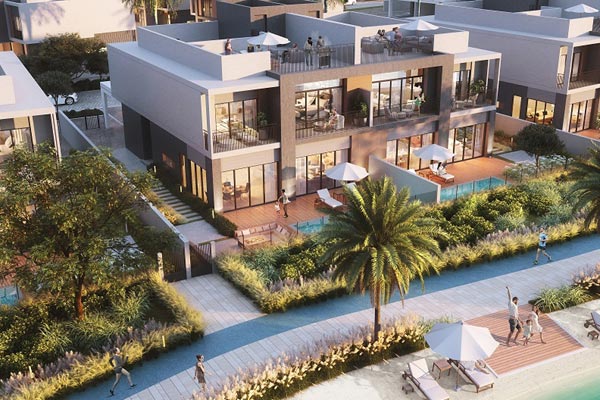 Master-developer Dubai South Properties has announced the sell-out of four- and five-bedroom villas within the first phase of its recently-launched project 'The Pulse Beachfront' just a few weeks after its soft launching.
The launch of ‘The Pulse Beachfront’ came following the successful sell-out of ‘The Pulse Villas’ development, which was announced earlier this year.
With a built-up area ranging from 2,600 - 4,800 sq ft of living space with private gardens ranging from 1,400 – 4,000 sq ft, The Pulse Beachfront is home to 1,000 residential units in a mix of three-, four-, and five-bedroom villas.
Dubai South Properties said all villas come with master bedrooms, maid room, closed fully equipped kitchens, private gardens, 2-3 shaded private parking, spacious living rooms, study rooms and rooftops.
The project, which will feature a 200-m-wide, artificial beach lagoon with sandy beachfront and Olympic swimming pool, is located along the Expo Road and is scheduled to be completed by 2024.
To cater to the surge in demand following the selling out of the first phase, the company will launch Phase Two and Three which will focus on premium four- and five-bedroom villas with improved layouts and additional features, such as a three-car garage and rooftop terraces for all villas, said the statement.
Moreover, the four-bedroom villas will include four master bedrooms and six bathrooms, while the five-bedroom villas will come with five master bedrooms, seven bathrooms, and a game or study room. Construction of the project is set to commence in March 2022, it added.
As part of its flexible payment scheme, Dubai South Properties is offering a 5% down payment option in addition to its two-phase plan where in 50% will be paid during construction and 50% over two years post-completion.
The Pulse Beachfront community also boasts additional amenities, such as a fitness centre, a lap pool, yoga studios, a kid’s club and water park, a children’s pool, skate parks, lazy river, jogging track, cycling track, as well as a number of F&B retail outlets.
In addition, it has lots of greenery and dedicated open areas for beach tennis, padel tennis and a basketball court.
Share