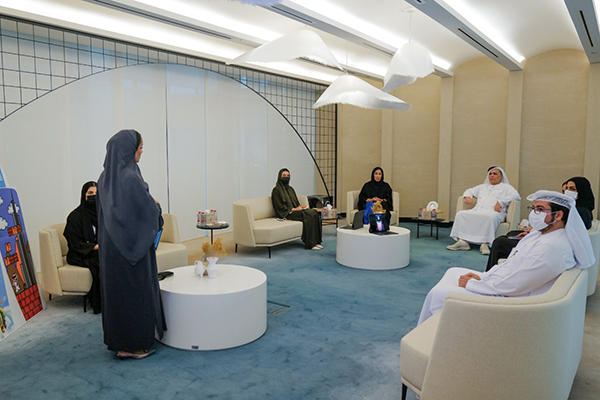 Image courtesy: WAM
Brand Dubai, the creative arm of the Government of Dubai Media Office, and Dubai’s Roads and Transport Authority (RTA) have announced the renewal of a partnership to launch initiatives to provide the community with new creative experiences in public spaces.
The announcement was made during a meeting held at the Government of Dubai Media Office (GDMO) between RTA Director General and Chairman Mattar Mohammed Al Tayer and GDMO Director General Mona Al Marri. As part of the partnership, the two organisations will launch projects that will consolidate efforts to realise Dubai’s vision to transform itself into an open-air museum.
A fresh series of initiatives to be implemented by Brand Dubai and RTA will see them working with local and international artists to enrich Dubai’s public environment and create new connections with the public through art and other forms of creative expression.
The renewal of the partnership is the continuation of a three-year collaboration which resulted in several creative projects, Emirates news agency WAM reported.
Al Tayer said: "We are looking forward to combining our resources and capabilities with Brand Dubai to roll out another series of creative projects that will add a new vitality to Dubai’s urban spaces. Our previous partnership had yielded several projects that brought the community together to celebrate art, creativity, culture and heritage.
"RTA is committed to working with leading organisations and artists to transform the environment that Dubai offers to both residents and visitors. Through the next phase of joint projects, we seek to creatively enrich a new set of public spaces in Dubai that will allow the community to relate to these areas in unique ways."
On her part, Al Marri said: "Brand Dubai is pleased to extend its collaboration with RTA to launch a new set of projects that make Dubai’s public spaces more inspiring and engaging. Building on our previous partnership, we will be implementing fresh initiatives to infuse a new creative energy and artistic liveliness into the emirate’s urban environment to transform Dubai into the world’s best city to live in and work.
"These projects seek to celebrate the heritage, cosmopolitan character and aspirations of the city, in addition to enhancing the quality of life and happiness of people who live in and visit Dubai. We believe these initiatives will also support efforts to promote creativity and innovation and attract talent, tourism and investment into our city."
In 2018, Brand Dubai and RTA implemented the Dubai Metro Murals Project, which saw international artists paint murals on pillars of the Dubai Metro on Sheikh Zayed Road between the Dubai International Financial Centre and Emirates Towers stations.
As part of the Jumeira Project, the two organisations also launched a series of public art installations at bus stops in 2020 to raise the neighbourhood’s profile as a social and creative destination.
In 2019, Brand Dubai and RTA organised the Metro Music Festival, which featured performances by musicians from both traditional and non-traditional genres of music at Dubai Metro stations. In the same year, they launched the first phase of the Parking Metres Project that saw parking machines in prominent areas being turned into artworks.
Share