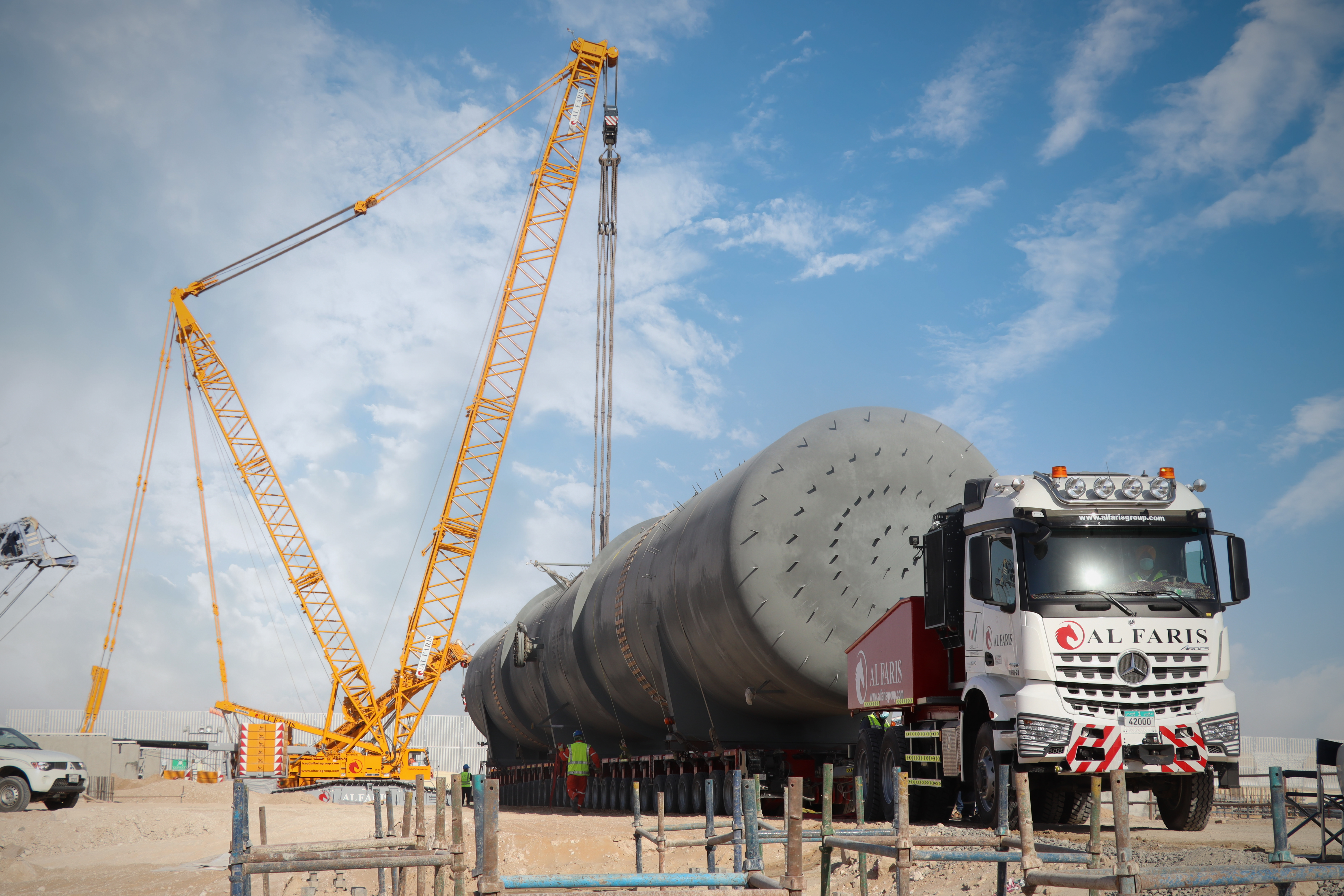 Al Faris Group, which claims to have the largest fleet of cranes and other heavy equipment in the Middle East, said it has completed the transportion and lifting of 30 overflow tanks for the mega Mohammed Bin Rashid Al Maktoum Solar Park project in Dubai.
Al Faris pointed out that the execution of the complete logistics chain was a challenging one.
This complicated project work was awarded to the group mainly due to its expertise in transporting large, abnormal loads involving high complexity in planning and execution, said a company spokesman.
Announcing the feat, he said: "Each tank was 52m long and weighed 235 tonne which made it an extremely big challenge for byroad transportation. And the biggest challenge was to find a feasible route from Jebel Ali Port to Solar park, Al Qudra in order to transport the cargo efficiently."
The transportation was carried out with the group's Mercedes Arocs trucks fleet attached to two files 30 axle Goldhofer THP/SL conventional hydraulic trailers with two tanks in one convoy, he added.
Unraveling the strategy, he said: "The loads were first off-loaded and stored on customized stools fabricated in-house by Al Faris at Jebel Ali Port. Due to time limitations at the port and high volume storage the project needed quick response time with professional planning and execution."
"At the project site, the overflow tanks were lifted using our Liebherr 400t crawler crane along with other supporting mobile cranes which travelled a distance of more than 100m before placing the load on the foundation," he explained.
A project of this nature requires exceptionally detailed planning to orchestrate the complex activities necessary for ensuring uninterrupted safe services; from route analysis to on-road safety permissions, stated the spokesman.
"The route was analyzed and surveyed by our technical team. The technical support documentation, execution plans, route analysis report and HSE protocols were prepared in-house and discussed with the client prior to project execution," he revealed.
Approvals from RTA for transportation and road modification works, NOC from port authorities were also all taken care of by Al Faris, he added.
He pointed out that significant road modifications, diversions and managing temporary traffic routes were a requirement in order to carry out this project successfully.
"Bypass roads were made temporarily in order to avoid the overhead height restrictions in the transportation route," he noted.
"Our team of engineers and technicians carried out the operation smoothly with utmost safety and efficiency with all approvals and safety measures in place and the help of police escort vehicles," he added.-TradeArabia News Service
Share