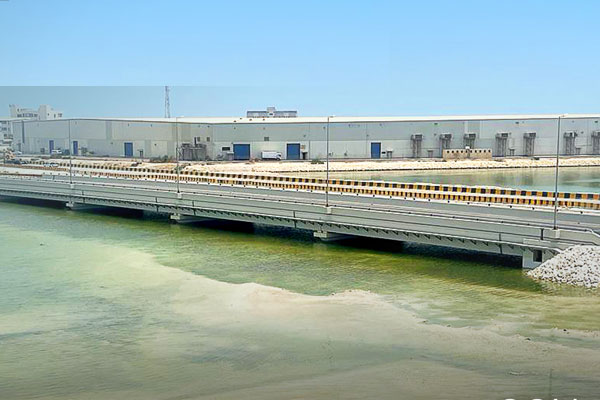 SSH has announced that the Tubli Bay Water Flushing Improvement (New Alba Bridge) in Bahrain  has been selected as the 'National Winner in the Road Infrastructure Project of the Year' category at this year’s MEED Project Awards. SSH is the lead consultant for the project.
Tubli Bay project is one of three designed and supervised by SSH to achieve the same goals. The other two projects are Ma’ameer Canal Widening and Ma’ameer Culvert Extensions and Widening, said a statement from SSH.
These projects are part of a larger scheme of work managed by the Ministry of Works (MOW) to improve the environmental and flushing conditions of Tubli Bays, it stated.
SSH pointed out that as part of the larger programme, this project enhanced regular seawater flushing circulation between Ma’ameer Bay and Tubli Bay, which will improve the water quality and preserve the distinctive ecological system.
Due to its positive short and long-term effects on the environment and people, the improvement in marine life and seawater cleansing can be regarded as a key engineering accomplishment, it stated.
The Tubli Bay project improved water quality through water conservation, increased accessibility to an industrial region, which encouraged investors to capitalise there, and increased job creation because of the new access to the industrial area. The project also enhanced the wildlife habitat in an area designated as a wildlife natural reserve zone for migrating birds like flamingos.
On the top recognition, Hussain Najem, the Senior Resident Engineer at SSH (Bahrain), said: "The construction of a bridge was once a concept, but in a very short amount of time, that dream became a reality thanks to a tremendous amount of hard work, devotion, and passion."
"I want to express my gratitude to the Bahrain Infrastructure team for their contribution to this success. Congratulations on your outstanding achievement," stated Najem.
One of the leading master planning, infrastructure, building design and construction supervision firms in the Middle East, SSH has a reputation for design integrity and a portfolio that includes landmark projects throughout the region.
The company has offices in Abu Dhabi, Algeria, Bahrain, Dubai, Kuwait, London, Oman, Saudi Arabia, Sub-Saharan Africa and North Africa.
The next stage of the Meed Awards is to identify the overall Mena winner for each category, which will be announced on November 23.-TradeArabia News Service
Share