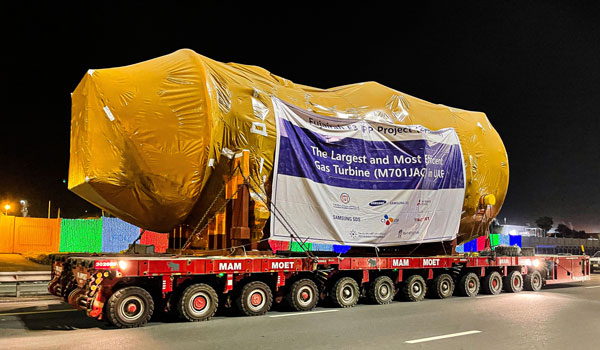 Transporting giant gas turbines for the project
Mammoet, a global market leader in heavy lifting and transport, is accomplishing the full transport and lifting involved in the Fujairah F3 power project, the largest independent combined cycle power plant in the UAE.
Located 300 km northeast of Abu Dhabi, the 2.4GW plant is being developed as an Independent Power Plant (IPP) project, incorporating an efficient combined cycle technology, and it will make a crucial contribution to the country's power generation sector.
Samsung C&T Corporation, the EPC contractor of the project, awarded Mammoet with the receiving, transport, lifting and installation scope of power plant components, including the three largest-capacity and most efficient gas turbines in the UAE.
Safe and timely execution
The company’s longstanding track record of safe and timely project execution in the country - specifically for projects executed in the Critical Infrastructure & Coastal Protection Authority (CICPA) areas - led to Mammoet being tasked with the project’s heavy and oversized cargo.
Abu Dhabi Ports’ Fujairah Terminals, operating at the Port of Fujairah under a concession agreement, was selected as the most suitable port for the receiving and handling of over-dimensional cargo, due to its location, thus avoiding the mountains of Fujairah with their steep slopes, its infrastructure and the technical capabilities of Fujairah Terminals.
In total 105 power plant components needed to be transported 23 km from the Port of Fujairah to the project site, located at the Fujairah Water and Electricity complex in Qidfa.  The only viable route that connected the port with the power station presented a challenge that needed to be addressed before transport could take place. Other route alternatives were too restrictive as they passed through the mountains inland.
Challenges en route
The route had an overhead bridge with a maximum clearance of 7.3 m, while some of the components, such as the gas turbines, needed a clearance of 7.5 m, including the trailers. To allow the cargo to pass under the overhead bridge, Mammoet engineers chose to load the turbines directly onto the trailers, without the use of standard transport beams. This reduced the overall transportation height by approximately 30cm but meant the cargo could not be offloaded on stools for temporary storage and would need to be lifted off the trailers and installed directly upon arrival at the site.
Detailed engineering, thorough planning, along with timely obtaining of required approvals and permits - including CICPA passes - resulted in all components being delivered to the site securely and on time. Three gas turbines, each weighing 528t and measuring 13.6 m long, 6.1 m wide and 6 m high, and three gas turbine generators, each weighing up to 395t and measuring 11 m long, 5.8 m wide and 5.2m high, were delivered to the site, safely crossing underneath the bridge. They were then lifted off the trailers and directly installed onto their foundations using Mammoet’s gantry.
In addition, Mammoet utilised its 1,250t and two 400t crawler cranes for the installation of other components, including 45 modules for a Heat Recovery Steam Generator (HRSG).  Each module, weighing up to 338t, needed to be lifted out of its shipping frame before being installed inside the HRSG unit.
Safety culture
Mammoet was recognised for its safety culture and contribution to 3 million safe man hours on the Fujairah F3 project.
Located in Fujairah's Qidfa area, between the existing Fujairah F1 and Fujairah F2 water and electricity plants, the Fujairah F3 will be able to power the equivalent of 380,000 households, once operational. It will incorporate advanced “JAC”- class gas turbine technology and will utilise the most efficient combined cycle technology in the region.-- TradeArabia News Service
Share