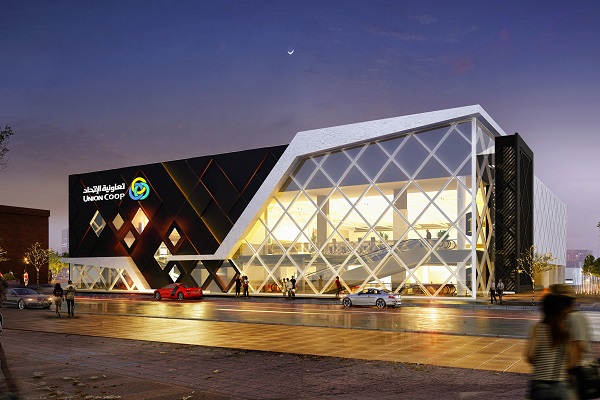 Union Coop, the largest consumer cooperative in the UAE, said steady progress is being made on its Al Barsha – 3 project in Dubai which is now 40 per cent complete.
Work is currently underway to complete the concrete structure of the building at the end of casting the roof and floor surface, which is expected to be completed this week, said a statement from the Union Coop.
Electromechanical and finishing work has also been carried out for the basement and ground floors, it stated.
Union Coop revealed that the Dh60 million ($16.3 million) Al Barsha 3 centre is spread over an estimated area of 50,000 sq ft with the total build up area of about 148,000 sq ft.
It comprises a basement, ground, mezzanine and first floor, where basement floor will be allocated to parking facilities for consumers and shoppers, in addition to providing stores for the branch along with shoppers service facilities such as toilets, ablutions and prayer rooms, it added.
Union Coop pointed out that the move comes within the framework of its plan for strategic expansion and increasing its outreach to serve the members of society, and contribute to obtaining a unique shopping experience.
The new branch will help increase Union Coop’s strategic inventory by 11 per cent, it stated.
On the upcoming project, CEO Khalid Humaid Bin Diban Al Falasi said: "The first floor of the center will consist of Union Coop hypermarket, covering an area of 40,000 sq ft housing over 50,000 products, in addition to dedicated sections of fresh food products such as a bakery, fishery, butchery, vegetables & fruits section, dairy section, spices, legumes, date, coffee and honey."
The new branch would allocate the ground floor to 12 commercial, service stores and 16 point of sale counters, in addition to space for shoppers' car parking," he stated.
Al Falasi said the new site is characterized by a direct view of Hessa Street, which connects Al Khail Street and Sheikh Mohammed bin Zayed Street with Dubai Marina region and the Sheikh Zayed Road.
The branch will be able to serve the residents of Al Barsha, Al Barsha South, Marina and Tecom area, he noted.
With the project achieving steady progress, all the construction related works will be completed in November this year. The testing and operation works will be conducted in mid- November and the Al Barsha 3 centre will be handed over the next week, he added.-TradeArabia News Service
Share