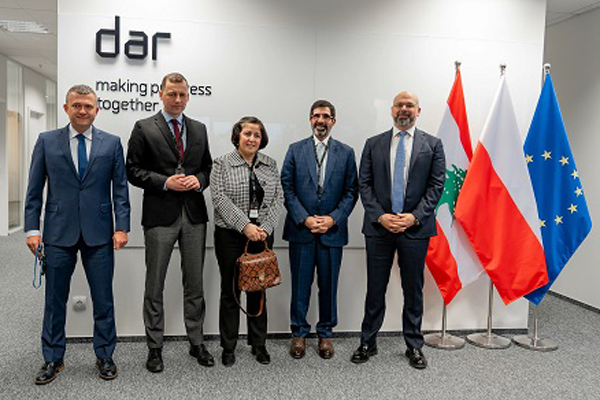 Leading Lebanese design firm Dar Al Handasah Consultants (Dar) has announced the opening of its new office in Poland.
The move into Aleje Jerozolimskie 142 B 02-305 in Warsaw comes after Dar began its design activities as the Master Civil Engineer on the new Polish airport - Centralny Port Komunikacyjny (CPK).
Dar is one of the world’s leading consultancies, providing design, planning, engineering, and project management services for a wide variety of market sectors, including buildings and cities, transportation and civil infrastructure, water and the environment.
The opening ceremony was attended by Dar’s Chairman and CEO Talal Shair, Regional Director of Operations Danny Aoun and a team of the company’s leading directors and industry experts in addition to Mikołaj Wild, the CEO of new Polish airport CPK; Piotr Kasprzyk, the Director of Aviation at CPK.
It was also attended by a representative from the Polish national airlines LOT and Lebanese Ambassador to Poland Reina Charbel, and as well as senior stakeholders, officials, and subconsultants in Poland’s aviation industry.
Dar’s Chairman and CEO Talal Shair said: “Even as one of the world’s leading aviation design consultants and with our experience in airports around the globe, we were captivated by the sheer vision and ambition of the new airport. And that made it an even greater honour when our company was named the Master Civil Engineer."
"We are here today to fulfil all of our promises and more, by leveraging our technical excellence and consulting capabilities to help deliver a highly-sustainable, future-fit, and resilient airport that can bolster connections in Europe and position Poland as a continental hub," he added.
Regional Director of Operations Danny Aoun emphasized Dar’s long-term commitment to Poland, adding: "We are settling in to establish a local team of experts who can tailor our company’s considerable expertise and global credentials to support projects in Poland and Europe deliver even more impact and value to communities across the country."
Dar, he stated, was also the founding member of Dar Group, a global design, engineering, and consulting group with award-winning impact and global reach.
"In 2022, Dar Group ranked 1st among international design firms in the Airports market as well as 10th among international design firms overall, 3rd in Buildings, and 6th in Transportation (Engineering News Record)," he added.-TradeArabia News Service
Share