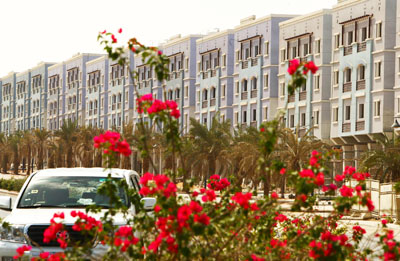 Lack of stock availability had impacted activity levels in Saudi Arabia’s real estate sector during the third quarter of the year, according to CBRE, a global real estate consultancy firm.
Looking at Saudi Arabia’s office sector figures, the majority of activity remains centered towards Riyadh, with occupancy levels now reaching 99.0% and 98.7% for Grade A and Grade B stock respectively, stated CBRE in its Saudi Arabia Real Estate Market Review Q3 2022.
Constrained supply levels have continued to support growth in rental rates, where in the year to September 2022, average Grade A and Grade B rents in Riyadh increased by 5.9% and 3.5% respectively.
In Jeddah, CBRE sees an uptick in demand with most requirements favouring serviced office offerings, as average Grade A rents increased by 8.2% when compared to Q3 2021.
In the Eastern Province, Grade A rents in Dammam and Khobar registered an increase of 3.9% and 8.2% respectively over the same period, it stated.
On the residential sector, CBRE said the transaction volumes fell by 15.5% in Q3 compared to a year earlier, with the total value of transactions also slightly decreasing by 0.8%.
Overall, the number of residential transactions totalled 37,743 and the value of transactions totalled SR25.6 billion ($6.81 billion) this quarter.
With regards to transactions on a regional level, the Dammam Metropolitan Area (DMA) was the only region to record growth in transaction volumes with an increase of 12.0% in the year to Q3 2022.
Riyadh and Jeddah have maintained their downward trend in their total transaction volumes with their total diminishing by 31.1% and 19.3% respectively over the same period. Average apartment prices across Saudi Arabia have increased by 7.8% in the 12 months to September 2022, with prices in Riyadh, Jeddah, Dammam and Khobar increasing by 13.1%, 8.9%, 5.6% and 3.7% respectively, stated the report.
Looking at Saudi Arabia’s hospitality sector, the second half of 2022 has seen a strong rate of recovery underpinned by a rebound in religious tourism, the continued growth in the number of entertainment initiatives enacted across the country and the sharp rebound in conferences.
As a result, the kingdom’s ADR and average occupancy rate increased by 19.5% and 17.6% respectively, in the year to date to September, with its RevPAR also surging by 74.9%.
In capital Riyadh, the average occupancy rate had improved by 5 percentage points when compared to the year to September 2021, posting notable growth of 23.4% and 35.1% in terms ADR and RevPAR respectively.
In Jeddah too, the hospitality market fared well, with the ADR and occupancy rate recording growth of 19.6% and 6.5 percentage points in the year to date to September 2022, where its RevPAR grew by 35.2%.
In the holy cities of Makkah and Medina, the meaningful return of religious tourism has meant that RevPARs saw a marked increase of 266.6% and 214.6% over the same period, although it is worth noting the low base these percentage changes originate from. In the Eastern province, Dammam and Khobar have recorded deteriorating performance compared to a year earlier.
Taimur Khan, Head of Research (Mena) said: "Whilst real estate market performance across all major sectors and cities in Saudi Arabia remains robust over the course of the third quarter, we are seeing limited levels of suitable stock curtail activity across the kingdom."
"We expect this trend to continue in the short-run where activity levels are likely to remain somewhat subdued and performance indicators continue to trend up, almost uniformly across sectors and major metropolitan areas," noted Khan.-TradeArabia News Service
Share