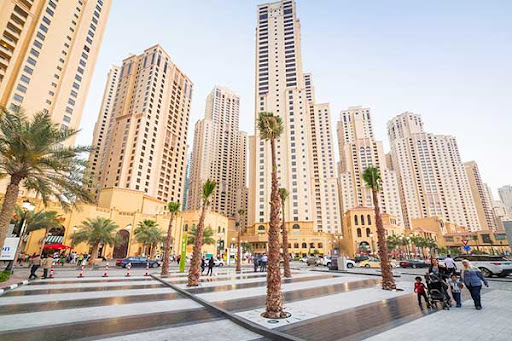 New residential supply in Dubai slowed significantly in Q3 2021 compared to the previous quarter due to continued Covid-19 linked restrictions and delays, according to property management expert Asteco.
Only 100 villas were delivered in the quarter whilst the number of completed apartments stood at approximately 3,600 properties, it stated.
Based on recent construction progress and developer announcements, Asteco expects another 9,300 apartments and villas for handover by year-end, with most of this supply attributed to the Azizi Riviera development. However, several projects are likely to be delayed and spill over into 2022.
In contrast, the Asteco report said developers in Abu Dhabi delivered approximately 2,200 residential units in Q3 2021, a slight uptick from 2,070 units offered in Q2. These included three buildings on Reem Island (about 850 units) and other buildings and villas located across Abu Dhabi.
An additional 4,600 residential units are due for delivery in Q4 2021; however, some projects may be delayed and spill over into 2022.
Demand for spacious villas would remain robust in the short term across the country, continuing a trend that emerged after the pandemic lockdowns, said the industry expert in its Q3 2021 UAE Real Estate Report.
According to Asteco, the post-Covid resurgence of the UAE’s real estate market continued apace in Q3, particularly in the villas segment, which saw as much as 37% YoY expansion in sales prices for some Dubai units.
On Dubai's new project launches, Asteco said off-plan, under construction and completed developments continued to be well-received by investors and end-users despite recurring oversupply concerns. Government initiatives and Expo 2020 are likely to encourage further releases, it added.
Asteco pointed out that apartment and villa rental rates continued to record a notable upward trajectory in Q3, with 3% and 6% quarterly increases, respectively. Annual rental growth in the villa market was particularly significant at 19% growth, whilst average apartment rental rates rose marginally by 3% YoY.
Villas remain the primary focus of customer demand, and the limited number of new handovers translated into higher asking rates. As such, sales prices recorded a significant surge, with average quarterly and annual increases of 9% and 37%. The strong demand in villas has also positively impacted apartment sales price growth, which, although less pronounced, was still considerable at 6% over Q2 2021 and 14% over the year.
In Abu Dhabi, the apartment rental rates were largely unchanged from the second quarter. However, apartment rates softened marginally year-on-year, registering a 2% drop compared to the same period last year. Incentives such as multiple cheques, rent-free periods and waived/discounted agent commission fees boosted demand.
The villa rental market continued to flourish, particularly in well-developed villa communities in Saadiyat Island, Yas Island, as well as Raha, Golf Gardens and Bloom Gardens. Average villa rental rates increased by 3% in Q3 2021, with some developments recording increments of up to 8%.
In contrast, apartment sales prices remained constant, although some developments recorded an increase in demand, which was reflected by a slight boost in sales prices.
New off-plan villa projects continued to attract high demand in Q3 2021. In addition, completed villas, particularly in high-quality communities, remained popular.
Villa sales prices increased significantly in the third quarter with an average growth rate of 8%, predominantly driven by existing villa developments on Saadiyat Island and West Yas on Yas Island.
Unlike Dubai and Abu Dhabi, Northern Emirates real estate is yet to benefit from the easing of Covid-19 restrictions nationwide and improved market sentiment. Further, internal and external tenant movement continues to exert pressure on occupancy and rental rates.
Apartment rental rates across the Northern Emirates softened marginally in Q3 2021, with average quarterly declines of 1% to 2%, with annual drops of 5% registered. High-end properties in Ras Al Khaimah and Fujairah were the most resilient, recording no change in rent in Q3 2021.
In the commercial space, landlords offering flexible payment plans and incentives kept Sharjah office rental rates unchanged over the quarter despite limited demand. However, annual declines in Sharjah office returns averaged 8%. In contrast, Sharjah apartment sales prices recorded a quarterly uptick of 3% in Q3 2021.
Prominent project launches in Q3 2021 included the last phase of Al Yasmeen by Al Zahia, comprising over 200 villas and townhouses. In addition, Alef Group launched the Suroor 2 building in Al Mamsha, which will add another 211 residential units to the market, with delivery expected in 2024.
Sharjah Investment and Development Authority (Shurooq) is building two resorts, namely the Al Jabal resort, which will span 260,000 sqm on a hill terrain overlooking the Khorfakkan beach and is expected to open in March 2023 with 45 eco-friendly units; as well as the Al Bridi resort, located adjacent to the region’s largest conservation park in Al Dhaid, scheduled for a 2023 opening and will feature 35 high-end private tents and a spa.
In Ajman, the Department of Economic Development (DED) revealed a significant increase in the number of new licenses in H1 2021 with 2,271 new permits issued, a 117% increase compared to the same period last year, signifying a path to economic recovery.
According to Asteco, the Al Ain market remained relatively stable in Q3, with discounts and incentives such as rent-free periods (up to 3 months) and flexible payment terms (up to 12 cheques) driving demand.
Apartment rental rates were largely unchanged in Q3 2021, although yearly returns were negative at a 1% decline YoY.
Villa rental rates remained the same since Q2 2021 and softened marginally by 1% annually, with compounds/private villas offered at above-market rates recording more significant rental drops to align with the market. Like in the previous quarter, tenants took advantage of lower rental rates to upgrade their accommodation by moving elsewhere in the emirate, it added.
Share