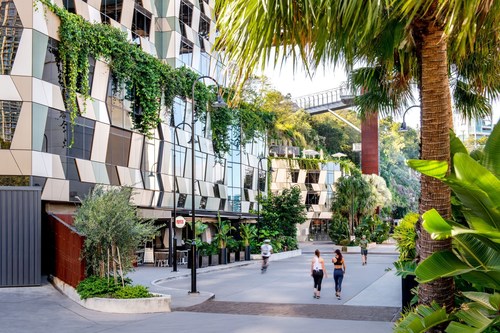 Ghassan Aboud Group, a UAE-based business conglomerate, has announced the acquisition of Vincent Hotel (formerly The Fantauzzo) based in Brisbane, Australia, for AED257 million ($70 million).
Vincent Hotel will add to the Crystalbrook Collection, a subsidiary company of Ghassan Aboud Group, which was founded by Ghassan Aboud as a hospitality management entity in 2016.
Currently, the group's hospitality and real estate investments in strategic locations in Australia are valued at $1 billion, all of which are managed by Crystalbrook Collection.
The six-storey Crystalbrook Vincent is located in the heart of Brisbane’s Howard Smith Wharves beneath the iconic Story Bridge. It has 166 rooms and a suite, the Fuime rooftop bar and the famous Italian Polpetta restaurant as well as a rooftop pool and a 24-hour fitness centre.
The hotel features over 500 paintings by accomplished artist Vincent Fantauzzo. Fantauzzo is renowned for his award-winning portraits including a portrait of the late Heath Ledger, released weeks before his passing.
With this strategic buy, the group has become Australia’s largest independent owner of five-star hotels and resorts.
Group Founder Ghassan Aboud said: "The acquisition of Vincent Hotel in Australia underlines the financial strength of our organisation, driven by the enabling environment offered by the UAE where we are headquartered. This is one of the largest transactions we have conducted in the hospitality sector."
The Syrian entrepreneur revealed that the group is now eyeing several core sectors in the UAE including retail, automotive, e-commerce, and trade and distribution.
The deal was negotiated by CBRE hotels, stating the deal indicates the interest of investors in the recovery of the hospitality sector and the strong presence of Crystalbrook Collection with a presence in Sydney, Byron Bay, Cairns, Newcastle, and Port Douglas.
A major champion of sustainability, the hotel does not use single-use plastic and has 100% waste-free bathrooms where everything is reusable, recyclable or biodegradable.
The hotel also minimises its food carbon footprint by ensuring that at least 80% of all produce served within the hotel is sourced within a three-hour radius. Further, it has embraced advanced technology to reduce the need for waste through paperless check in and check out and in-room tablet control centres.
"I love what Crystalbrook Collection is doing with sustainability," remarked Vincent Fantauzzo.
"This is something very important to me personally - it opens the door for exciting new collaborations which I hope will enhance guest’s experience and inspire creativity," he added.-TradeArabia News Service
Share