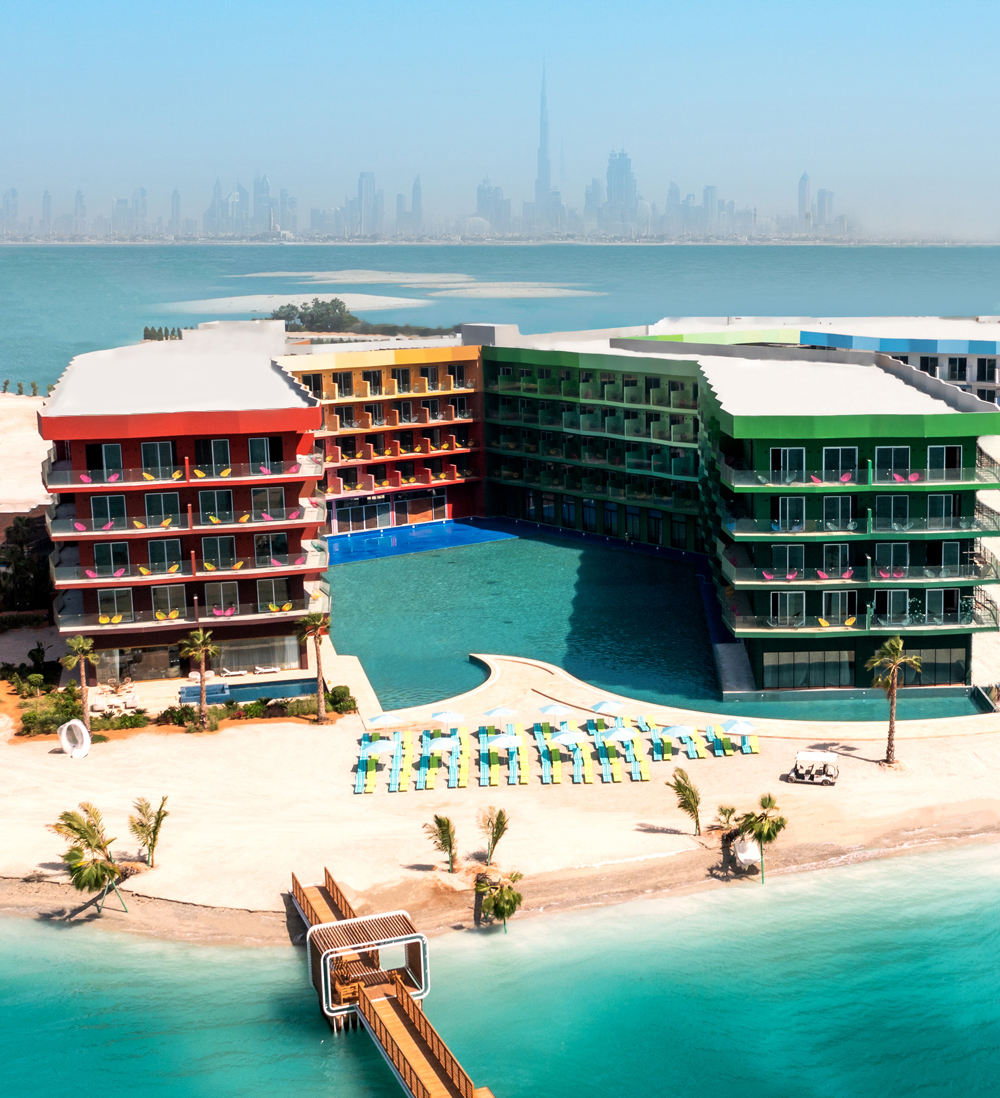 Leading developer Kleindienst Group said finishing touches are being given to a giant beach project within its master-planned second home and tourism island destination, The Heart of Europe, being developed just 4 km off the coast of Dubai at an investment of $5 billion.
Rainbow Beach is all set to welcome guests as it adds 800 m of prime shoreline to 3,580 m of white sandy beaches and the emirate’s celebrated coast whilst it introduces playful and relaxing lifestyle concepts to the spectacular mega-project amid The World, Dubai, said the statement from Kleindienst.
It is a golden gateway to the resort’s new hotel concepts with uninterrupted sands hosting distinct food and entertainment offerings for a new waterside destination.
According to Kleindienst, destination beachfront will embrace three distinct themes and connect The Heart of Europe’s showpiece hotels, including Côte d’Azur’s rainbow-coloured architecture, Marbella resort and the region’s largest, most sustainable swimming pool.
One of the planet’s longest beaches, Rainbow Beach will spread alongside legendary ocean-hugging playgrounds such as Rio’s Copacabana and Miami’s South Beach.
Rainbow Beach also forms an idyllic buffer between the Arabian Gulf and Grand Azur, the record-breaking lifestyle pool that weaves between the Côte d’Azur hotels - Monaco, Nice, Cannes and St Tropez - themselves taking their distinctive colour inspiration from a rainbow.
It is designed to be more than simply a place for sun loungers and sunset strolls. However, like everything within The Heart of Europe, the sandy haven has been conceived with a sustainable lifestyle experience at its core.
With access to seven crafted F&B outlets, seven bars and seven swimming pools, Rainbow Beach is set to be a destination in its own right, incorporating the unmistakable European inspiration that curates all six Heart of Europe islands, said the developer.
“There are some stunning and famous beaches around the world, and then there is the next generation of superior waterfront…Rainbow Beach,” remarked its Chairman Josef Kleindienst.
"Taking its name from the quartet of brightly coloured hotels at the Côte d’Azur, this beautiful stretch of beach is a golden gateway linking the French Riviera-inspired resort with other major hotels that will help put The Heart of Europe on the global tourism map," he noted.
“This sumptuous sandy strip will be the longest stretch of uninterrupted, private beach in Dubai and is key to linking our prime hospitality resorts and some of the fantastic F&B they will offer,” he added.
Kleindienst said: "Like everything on our beautifully developed islands, this epic beach is the result of an innovative approach which has enabled us to evolve the way a beach is designed and deliver another world first off the Dubai mainland."
Monaco will become the first of the boutique properties to welcome visitors seeking French Riviera chic, sounds and flavours when it stages a likely ‘soft’ opening in June.
All four uniquely-located, upscale Côte d’Azur hotels are scheduled for an official public launch during Expo this autumn, adding 893 unique keys to the Dubai hospitality portfolio, said the top official.
Various elements elevate Rainbow Beach as a fresh template in seafront design, shifting the focus from standardised areas in favour of an adaptive concept that takes its cue from the smart hotel themes it embraces - and then delivers that lifestyle on the beach, he noted.
According to him, clean energy, sustainable water transportation, and zero discharge and zero micro-plastics policies operate throughout, ensuring protection of Arabian Gulf marine life species - and that Rainbow Beach remains beautiful for all.
"Rainbow Beach goes way beyond just sun and sand," remarked Kleindienst. "This epic frontage is both a curated sanctuary and a sophisticated playground and exemplifies The Heart of Europe’s trend-setting mandate for placing innovation and sustainability front and centre of modern tourism aspirations," he noted.
“We are fast becoming renowned for normalising the unexpected and bringing the future mega-trends in our industry to the present…Rainbow Beach demonstrates that by delivering amazing here and now through beachlife experiences like never before,” he added.-TradeArabia News Service
Share