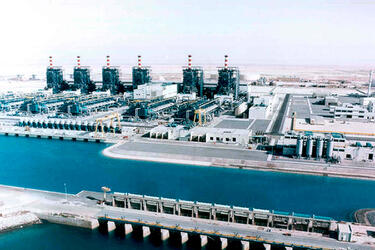 More than 70 per cent of the work has been completed on a major water desalination project at Umm Al Qaiwain being built at an investment of AED2.2 billion ($598 million).
The new plant, will come up on a 250,000-sq m area, will have four networks, with two being connected to the water supplies of the new water distribution centre in Al Khuraija, Ras Al Khaimah, while another will be connected to water supplies in Al Burairat, and another in Umm Al Qaiwain.
Phase I of the project is set to be completed and the plant will start processing 50 million gallons of water per day by the fourth quarter of 2021, said Suhail bin Mohammed Al Mazrouei, Minister of Energy and Infrastructure.
He was speaking during an inspection visit to the project site accompanied by Mohammed Mohammed Saleh, Director-General of the Federal Electricity and Water Authority (Fewa), and other officials.-TradeArabia News Service
Share