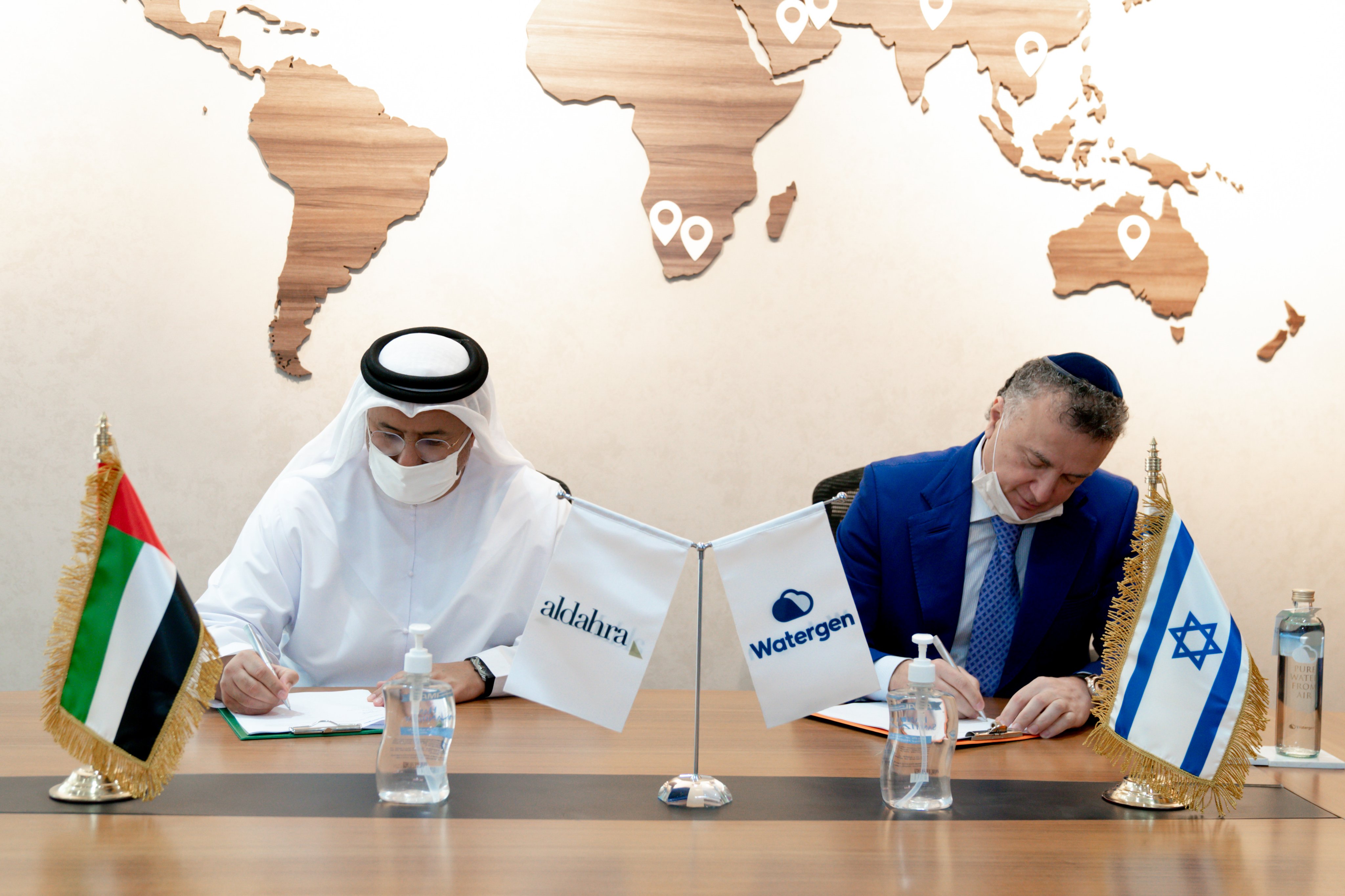 Al Dahra Holding Company, an Abu Dhabi-based producer of essential animal feed and food products, signed a strategic partnership agreement in the area of water security with the Israeli company, Watergen, developer of water-from-air solutions.
The agreement aims to establish a strategic partnership between the two sides to produce water from the air, creating a renewable source of pure water for human and agricultural consumption.
The two sides agreed to establish a permanent centre in Abu Dhabi for manufacturing and distributing drinking and irrigation water production equipment.
Watergen had developed a pioneering technology to produce water from the air and patented the world's most energy-efficient atmospheric water generator (AWG).
The agreement comes following the UAE company delegation's visit to Israel in October, following the peace accord between the UAE and Israel, to encourage cooperation and strategic partnerships between the two countries, said Khadim Al Darei, Vice-Chairman and Co-founder of Al Dahra Holding Company, after signing the deal with Michael Mirilashvili, CEO and President of Watergen.
Al Darei said during the Israel visit, the company’s delegation had met representatives of Israeli companies operating in the sectors of agriculture, water and technology and had even signed a MoU with Watergen covering an advanced technology for producing water from the air.
This gamechanger technology will help provide large quantities of drinking water, as well as water used in the irrigation of farms, parks, reserves, ranches and remote areas, he added.
An AWG can produce up to 5,000 litres of water per day for drinking and irrigation purposes.
"Amidst the concern for environmental issues around the world, especially in the UAE, environmental indexes are now being prioritised by developed countries. Therefore, Al Dahra aims to find sustainable and comprehensive environmental solutions that will protect the environment and support sustainable development programmes in the UAE," he added.
He pointed out that the technology will enable many sectors to benefit from a renewable water source and create promising economic solutions for providing environment-friendly water, instead of digging wells or water desalination.
Watergen, which was founded in 2009, operates in many countries around the world and aims, through its collaboration with Al Dahra Holding Company, to advance its strategic project to increase productivity and decrease cost.
The five-year collaborative project will developed and adjusted to accommodate the UAE desert environment, said Mirilashvili.
"Our visit to Abu Dhabi is due to the long-awaited Abraham Accord, which was signed by the UAE and Israel to establish stability in the region and normalise the ties between the two countries," he stated.
Watergen will showcase its technology in the UAE, to be promoted in the rest of the region, he said, adding that Watergen’s products will reduce the use of plastics and directly affect the environments of the UAE and other countries.
Watergen has three main AWGs, depending on the requirements of the situation. Each unit contains an internal water treatment system and can operate without any special infrastructure, which only require an electricity source except a source of electricity.
The large scale AWG is an industrial scale atmospheric water generator designed for towns, villages, factories, off-grid settlements and rural communities, which can produce up to 5,000 litres of water per day. They can also be installed on rooftops, helping to decentralise the supply of safe-drinking water in municipalities that have insufficient water infrastructure, he explained.
AWGs of up to 800 litres of water per day and 30 litres of water per day are used in households and offices respectively, he added.-TradeArabia News Service
Share