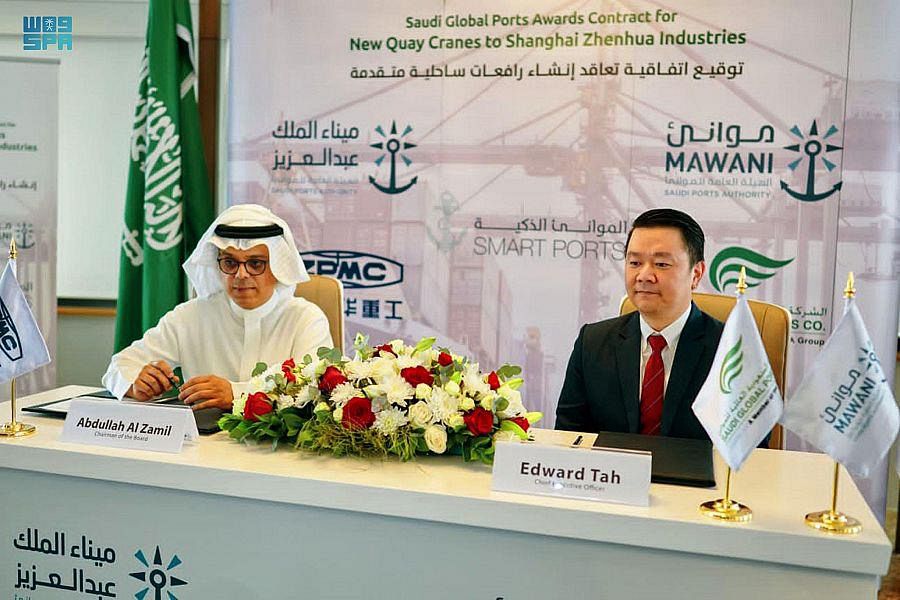 Saudi Global Ports (SPG) has reached an agreement with Shanghai Zhenhua Heavy Industries Company (ZPMC) to manufacture three state-of-the-art quay cranes for the King Abdulaziz Port in Dammam, according to the Saudi Press Agency (SPA).
SGP is a joint-venture company that is formed between Public Investment Fund (PIF) of Saudi Arabia and PSA International. In April 2020, it signed a 30-year build, operate and transfer (BOT) agreement for the container terminals in the King Abdulaziz Port in Dammam with Saudi Ports Authority (Mawani). In line with this agreement, SPG has embarked upon a drive to develop and modernise King Abdulaziz Port.
The port offers full-scale operational services with the help of hi-tech crane equipment capable of handling all kinds of cargo, with two modern container terminals, one chilled and frozen cargo terminal, two general cargo terminals, two cement terminals (one for Black Portland cement and clinker and the other for White Portland cement), one bulk grain terminal, one iron ore terminal, a ship-building yard, and oil and gas stations, along with a ship repairing facility consisting of two floating docks that can accommodate vessels of up to 215 m in length.
The deal was signed by Saudi Global Ports CEO Edward Tah and Liu Chengyun, Chairman and President of ZPMC, in the presence of Omar bin Talal Hariri, President of Saudi Ports Authority, and Captain Fahad Al-Amer, Director General of King Abdulaziz Port in Dammam, as well as Saudi Global Ports Chairman Abdullah Al-Zamil and Wan Chee Foong, Regional CEO, Middle East and South Asia, and Head of Group Business Development at PSA International.
The agreement reflects SGP’s commitment towards transforming King Abdulaziz Port in Dammam into a globally competitive and sustainable container hub in line with the commercial concession signed with Mawani worth SR7 billion ($1.86 billion), as the modern crane equipment will have a minimum outreach to load and unload containers up to 25 rows, which enables the handling of next-generation giant vessels at optimum efficiency and scale, the report said.
Saudi Global Ports is also assessing the possibilities to equip the cranes for remote operation and with photovoltaic panels to harness and operate them via solar energy to achieve sustainability and automation of port operations.
On the deal, Hariri said it was a direct result of the Smart Ports Initiative which was launched earlier this year to boost the competitive edge of Saudi ports and keep pace with a continuously evolving maritime industry, which calls for developing logistical performance and container ports in the kingdom given its strategic position as a hub connecting three continents and its leading role in regional and global trade, in line with the National Transport and Logistics Strategy (NTLS).
Al Zamil pointed out that Saudi Global Ports continues to take bold steps to transform the kingdom into a global logistics powerhouse in line with Saudi Vision 2030 objectives, along with achieving sustainability by looking at possibilities of harnessing renewable energy in future quay crane operations, supporting the Saudi Green Initiative, and participating in the global drive to combat climate change.
Foong said: "PSA is pleased to have worked alongside Saudi Global Ports to develop the optimal design and specifications of the quay cranes and support the rigorous evaluation process."
"PSA’s commitment to the transformation of King Abdulaziz Port in Dammam into a leading port with long-term sustainability, automation, digitisation and integrated supply chain goals will ensure Saudi Global Ports remain relevant and future-ready, realizing the Kingdom’s plans to become a global logistics hub," he stated.
Considered Saudi Arabia's largest port on the Arabian Gulf coast, the King Abdulaziz Port enjoys a unique location as a gateway of global trade with 43 berths, a total area of 19 sq km, and a throughput capacity of 105 million tons as well as rail connection to the Riyadh Dry Port, stated Hariri.
This helps simplify transportation of goods to the Eastern and Central regions of Saudi Arabia from countries around the world, he added.-TradeArabia News Service
Share