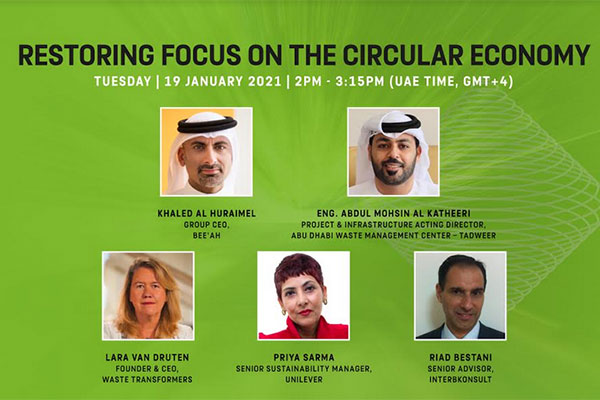 EcoWASTE, recycling, waste management and waste-to-energy platform, will host a virtual session in collaboration with Abu Dhabi Waste Management Center – Tadweer on January 19 that will address the role of waste management in the circular economy model.

Entitled ‘Restoring a Focus on the Circular Economy in the Aftermath of Global Developments’, it will examine how recent world events have resulted in new attitudes to waste management, the benefits of reducing, reusing and recycling, and evolving approaches to waste. It will highlight the realistic ways in which to reduce single-use plastic and how technology will increasingly impact the decisions taken within the industry.

Dr Salem Khalfan Al Kaabi, Director General, Tadweer, said: “There is an unprecedented chance for the entire world to accelerate efforts toward the adoption of the circular economy model, which bears many benefits for communities and various economic sectors. The efficient recycling and utilisation of resources, for example, stands to have a significant positive impact on the environment.

“This is but one of many seminars, conferences, workshops and events organised across Abu Dhabi to showcase the capital emirate’s adoption of the circular economy model, instilling it as a successful example for the region to follow. This embodies the United Arab Emirates’ unique and multifaceted approach to sustainable development, which continues to inspire the world.”

“EcoWASTE has quickly become as a solid foundation for proactive initiatives in waste management as well as other aspects of sustainable development in Abu Dhabi, and it continues to assume its role as an incubator for action, partnerships and ventures aiming to bolster Abu Dhabi’s economy and connect with other successful initiatives around the world,” he added.

The benefits from a circular economy to the public purse, society and environment around the world are enormous, with one recent study, published in Entrepreneur magazine, estimating $7 billion in new revenue opportunities from recycling for cities and recyclers, 250–350 million metric tons less carbon dioxide (CO2) in the air, 80 million tons of material recovered from residential single-stream recycling and 30 million more households with access to convenient recycling.

Locally, targets set by the UAE include treating 75 percent of municipal solid waste by 2025 and 85 percent by 2035, as well as reducing municipal solid waste generation to 1.4kg per person per day by the year 2025. When it comes to environmentally sound chemical management, plans include increasing the use of environmentally safe refrigerants to eliminate ozone-depleting substances by the year 2040, as Zawya reports in a piece on the UAE’s environmental policy.

In addition to the EcoWASTE virtual session taking place on January 19 will be the Municipalities Roundtable, during which Tadweer and representatives from key GCC Municipalities will discuss best practice for handling and treatment of medical waste during a pandemic. The invited Municipalities include Al Madinah, Dammam, Eastern Region, Makkah, Greater Amman (GAM), Oman, Kuwait and Bahrain. – TradeArabia News Service